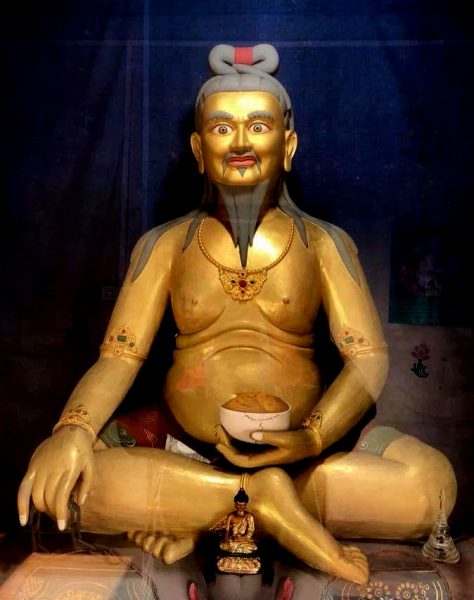 Thangtong Gyalpo was simultaneously the Mind Emanation of Guru Rinpoche, and of Chenrezi who bestowed guidance, including the method for meditative realization, on him throughout his life. A figure of prophesy, he came as a Vajrayana Master in a world that was suffering through degenerate times and his entire life was an offering to the well-being of sentient beings.

In his legendary biography, Thangtong Gyalpo carries many titles and identities: Chagzampa (iron-bridge builder), King of the Empty Plain, and Madman of the Empty Valley. He is also referred to as a Terton or Treasure Discoverer, as a Drupthob (a being who has realized the nature of self and phenomena), as a Great Mad Adept, as a Mad Yogi, as aPioneer of a most innovative and eclectic tradition, as the founder of the Tibetan Opera tradition, and as a physician and dispeller of epidemics.

Over an incredible lifespan which itself has become a teaching on the practice of longevity, Thangtong Gyalpo is believed to have realized immortality by gaining control of lifespan. He achieved this through advanced meditative techniques particular to the Vajrayana path. By all accounts he himself was believed to have lived for 125 years.

Besides his profound spiritual practice and teachings that was administered in numerous and often outrageous forms, Thangtong Gyalpo’s legacy is characterized by unprecedented engineering and architectural feats, metallurgy techniques not even conceived of at the time, and the arts which include the creation of Tibetan opera. He established 58 iron suspension bridges, 60 wooden bridges, 118 ferries, 111 stupas, and numerous monasteries and temples throughout the Himalayan region.

As a divine non-conformist figure who appeared wild and crazy to many, he was often called a myonpa or a madman in the Buddhist world. The monasteries, stupas, iron bridges, and art were his expedient means to lead people from all walks of life onto the sacred path of the Buddha, facilitating the permeation of the Buddha’s teachings deep into the fabric of society.

Therefore, his greatest legacy was not his expertise as an engineer and choreographer or even his ability to eradicate disease, but his skill at spreading the timeless wisdom of the Buddha beyond the monastery walls.

His teachings have been preserved by the Khyentse lineage. In other words, the teachings and traditions of Thangtong Gyalpo have survived into the 21st century primarily because of his link with Jamyang Khyentse Wangpo.

Thangtong Gyalpo was one of several accomplished Buddhist yogis, who lived and spread the Teachings of the Buddha and established a visible legacy in Bhutan and Tibet in the 14th and 15th centuries.