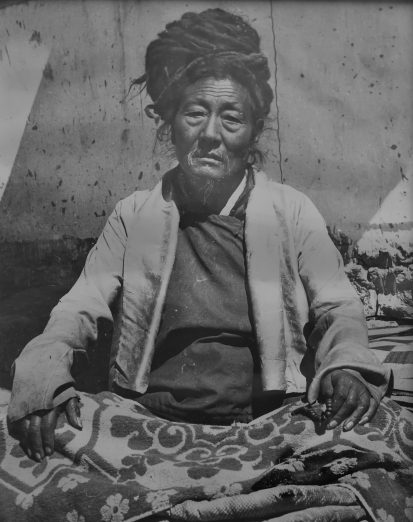 Drupthob Thangtong Gyalpo is a unique and prominent figure in Bhutan’s spiritual history which is marked by the blessings and prayers of the greatest Buddhist Masters. Thangtong Gyalpo’s legacy is revered today, through his incarnations and heritage.

A Lama from Rikhey in Tibet, called Rikhey Jadrel, came to be recognized as the 16th reincarnation of Thangtong Gyalpo. He received all the Oral Lineage teachings of the Great Yogi which he practiced and transmitted to many other lineage holders. He was described by Jamyang Khyentse Chokyi Lodro as “a being who has received blessings from the light rays emanating from the heart of Thangtong Gyalpo”.

It is said that Rikhey Jadrel Rinpoche was destined – that it was his lungten – to reside in Bhutan where he would establish his seat.

In 1974 Rinpoche was invited to Bhutan by Her Majesty Ashi Phuntsho Choden, the Queen of the second King of Bhutan, His Majesty Jigme Wangchuck. As an itinerant Yogi, Rinpoche traveled from Tibet to Ladakh in India where local people offered their faith and dedication. Among them were five anims (nuns) who became his first disciples.

Three of the anims from Ladakh accompanied Rinpoche to Bhutan. Upon arrival, he spent two years in meditation at Dumtseg Lhakhang, Bumdrak, and other sacred places in Paro valley. Thereafter, on the advice of His Eminence Lam Sonam Zangpo, and on the invitation of his patrons, he moved to Thimphu in 1976.

Rikhey Jadrel Rinpoche founded the Thangtong Dewachen Nunnery in Zilukha,Thimphu, (see the section on nunnery) initially residing for about four years in a bamboo hut at the site of the present Lhakhang to subdue evil forces inhabiting the area. The building of the present-day Lhakhang began in 1981 and was completed in 1983 with the installation of sacred objects. The images for the Lhakhang were crafted by Lopon Omthong and the zung (inner sacred objects) for the Thangtong statue was offered by Lam Sonam Zangpo, popularly known in Bhutan as Memey Lama.

Having established his seat in Bhutan with modest beginnings, Rinpoche is said to have taught the first group of nuns the merits of self-sustainance, hard work and discipline, in the true tradition of a drupthob.

Rinpoche passed away in 1984. The funeral rites were conducted by Kalu Rinpoche, who prophesied a swift reincarnation.